Owner Linda Page is a Nelson resident who bought the cottage wanting to make it available to visitors to the city. Its central location and charming street make it an ideal base from which to explore.

The History of No. 5 South Street

The cottage at 5 South Street has a history lasting 150 years.  In 1865 it was one of several simple four-roomed workman's cottages constructed for early Nelson settlers on Town Acre 456.  What became South Street housed many of Nelson's hardworking early tradesmen and their families.

Never redeveloped, the houses on the street became increasingly run down.  Under threat of development in the 1980s, the street was saved by a group of residents who lobbied the City Council, gaining South Street Heritage Precinct status.  This encouraged owners to restore the cottages, helped by the Council hiding electricity lines, paving the road and installing cast iron street lights.

South Street is now a cherished part of Nelson city - a delightful enclave just paces from its centre.  It is a wonderful base from which to enjoy Nelson, famous for its festivals, artists and markets.

You can see more of South Street's history here.

A South Street resident, Jeannie White, researched and wrote about the street.  Here is her information on Sojourn Cottage.

On January 27th 1923 an old lady died in the Public Hospital. The Coroner's verdict was that she "died of shock through being severely burnt at the fire which took place at her residence on January 25th 1923." She died because she enjoyed reading in bed by candlelight, but alas, the candle was too close to the window and a curtain was blown into the flame. Mrs. Henrietta McCoig had lived in No 5 since 1895 when she moved across the road from No 8, which she had owned from 1866 as Mrs. McCulloch. She had married John McCoig in 1875.

Other women had been owners of No 5 - Violet Hall; Elizabeth Liddell; Ruth Cowan (later Milner) and Clara Ellen Briggs; and sisters Inez and Gwendoline Higston from 1951. In 1981, Ian Jack bought the property for offices for his architectural practice, and so we come back to the fire in 1923, because it was an associate of Ian Jack who told me about the charred timbers on the loft floor which led me on a search for the cause. By looking through the Certificate of Title, I pinpointed January 1923 as the latest possible date for this fire and fortunately the guess was correct as proved by Mrs. McCoig's death certificate. With this proof, it was easier to search the appropriate period in the files of the Nelson Evening Mail for reports of the fire.

The date of the building of the first cottage is a little unclear. The 1865 rating map shows a block of land owned by John McVicar which seems about the area now occupied by Nos 5, 7 and 9 South Street. The rating roll of 1867/8 indicates that McVicar had built three cottages, each of wood and four rooms in 1866 with Walther, James and Hay as occupiers. Information seems to be sparse about this house.

According to Ian Jack and Associates, the present house has been constructed around the lower storey of the original two-storey cottage, the original first-floor joists now forming the ceiling. Hand-made nails were used in the original building, with kauri as match-lining in some areas. Brick and hand-chipped granite piles were used with the chippings placed as fill for the chimney base. There was also some evidence that there had been an exterior staircase. The upper storey had been burnt in the fire.

The group improved the house as bought from the Higson sisters and turned it into a worthy office for a firm of architects. They partially opened up the interior for easier working and added double garage space and garage gates. The "new" front window came from the old post office in Trafalgar Street, and the porch was built from salvaged materials from an old villa in Walnut Street, as did the side bay window. Painted with colours akin to those formerly used, the "new" building was appropriate for the required use, and the street. 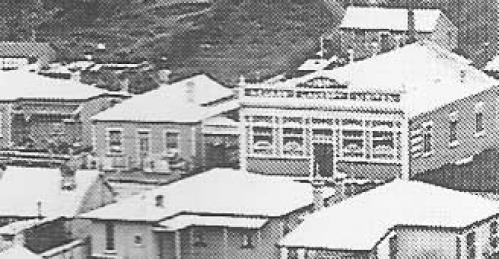